A new Swirl Dress for me, in a slightly different style 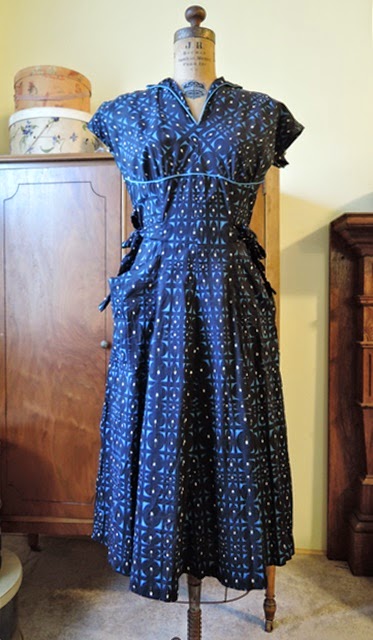 We all love a classic vintage Swirl dress, and this week I added another to my wardrobe. It's a very cool black print on dark vivid turquoise with small white flower buds.
This one is a little different style from my others. It still has the single Swirl button on the back of the neck and it wraps on the back as usual. But this one ties on each side to a set of ties that are attached on the front instead of wrapping and tying to itself.
This one also has a v-neck with a collar trimmed in solid piping and piping right under the bust, which also makes it different from my other Swirls.

Love it! Washed and ready to wear this Sunday, I already have a pair of stockings that are nearly the same turquoise as the dress.

I love that it's a dark color, because most of my Swirls are kind of Summer-y colors and I don't get to wear them much in cold weather. 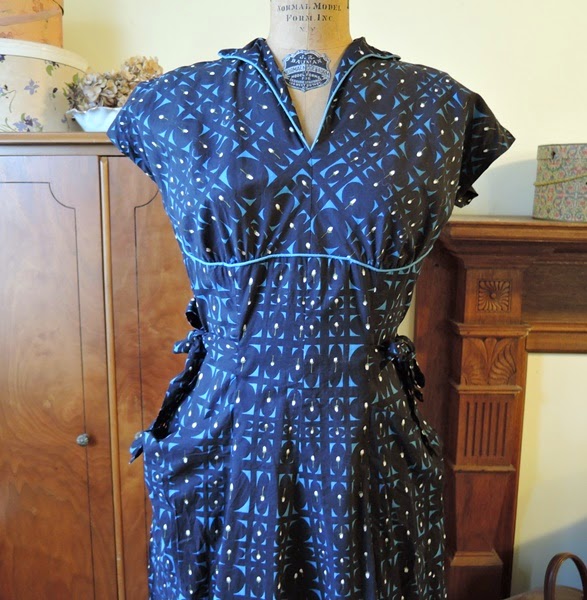 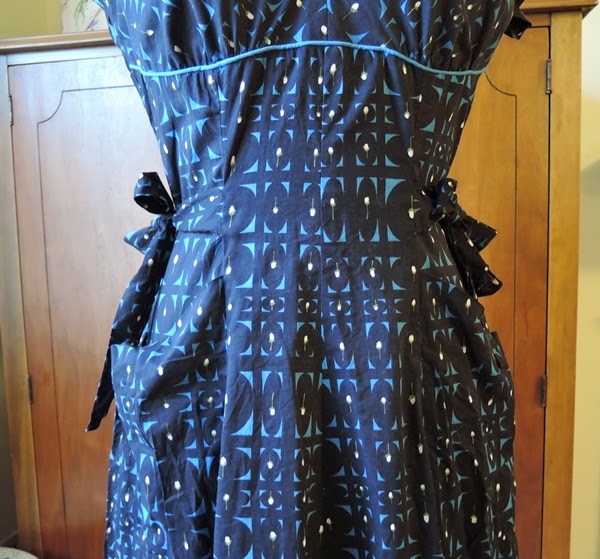 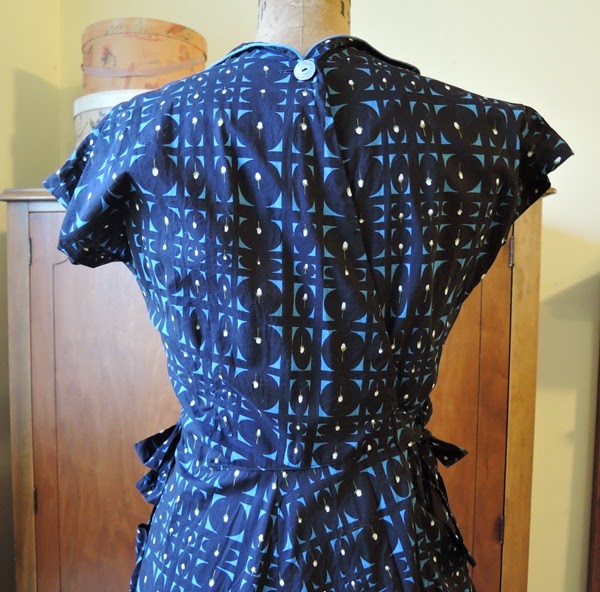 Vintage bookcase, filled with everything except books! 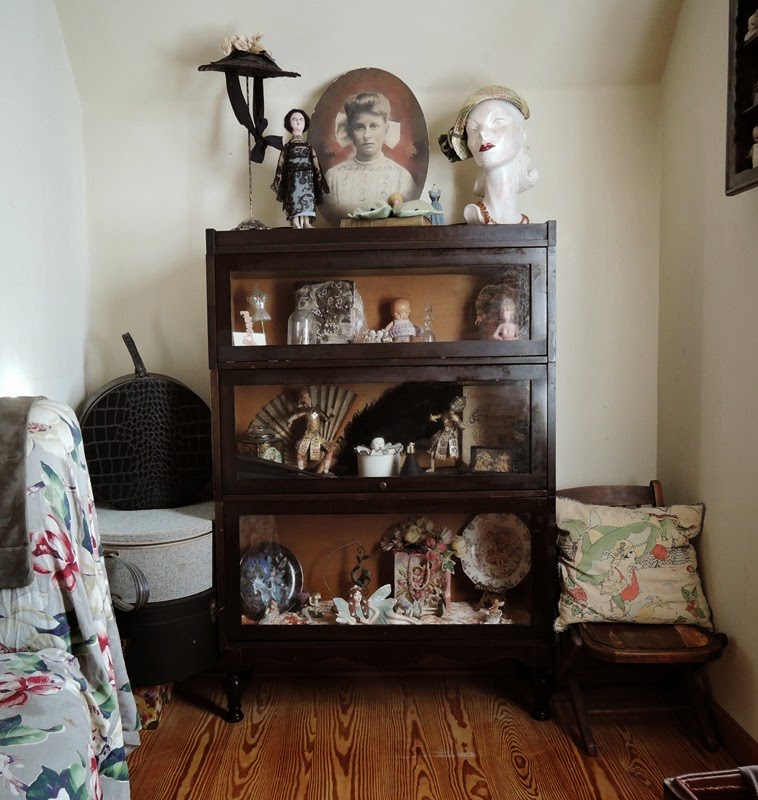 I've always wanted one of these old bookcases with the glass doors, but  they are usually priced high at local antique shops and estate sales. Finally I spotted one that was more in my price range, at the house clean-out that we went to last month.
We managed to get it into the truck with the cedar chest and boxes and bags of vintage clothing and linens that we cleaned out of the house. It sat in our garage for a while until I decided where to put it. I finally got it cleaned and set up today. It still needs a little oil to freshen the wood, but it's looking good.
I devoted each section to some of my favorite things - Kewpies, Oriental stuff and Fairy stuff. Pretty. 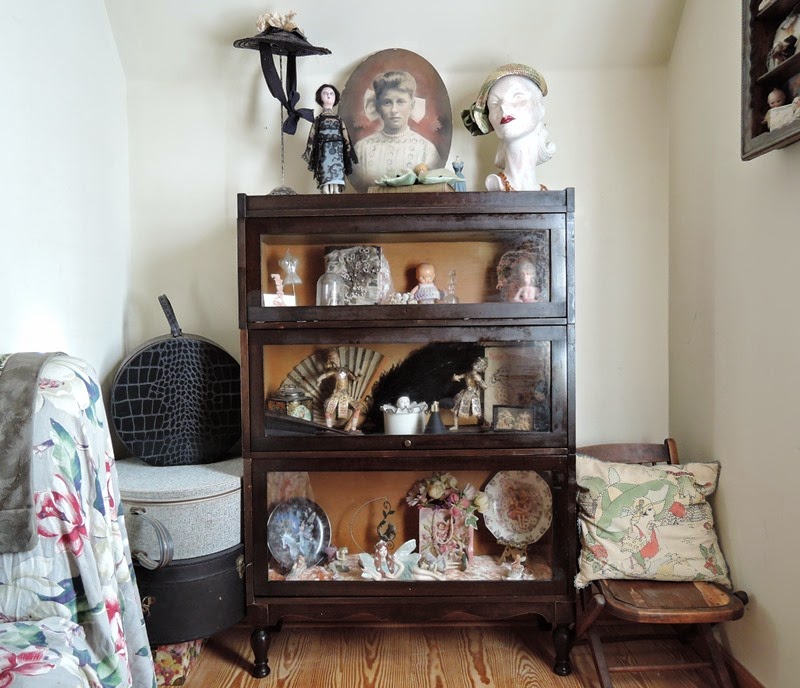 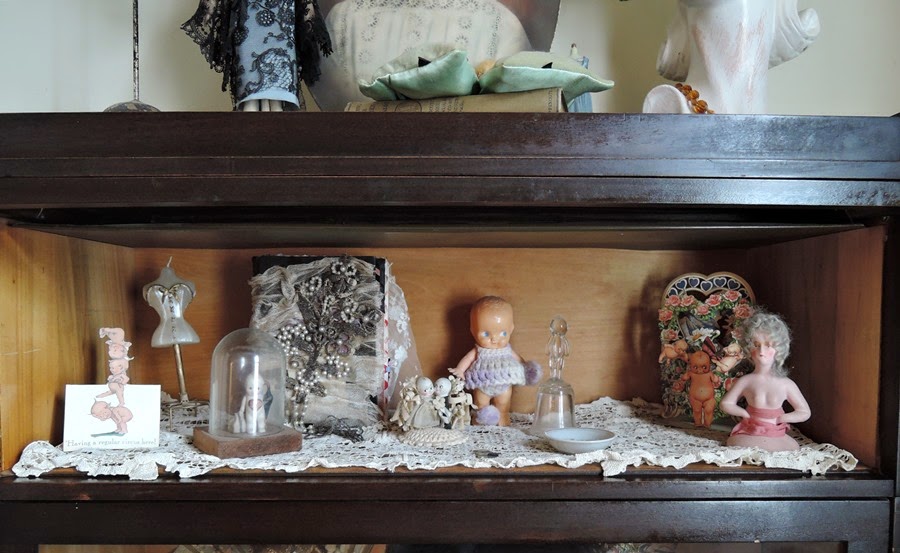 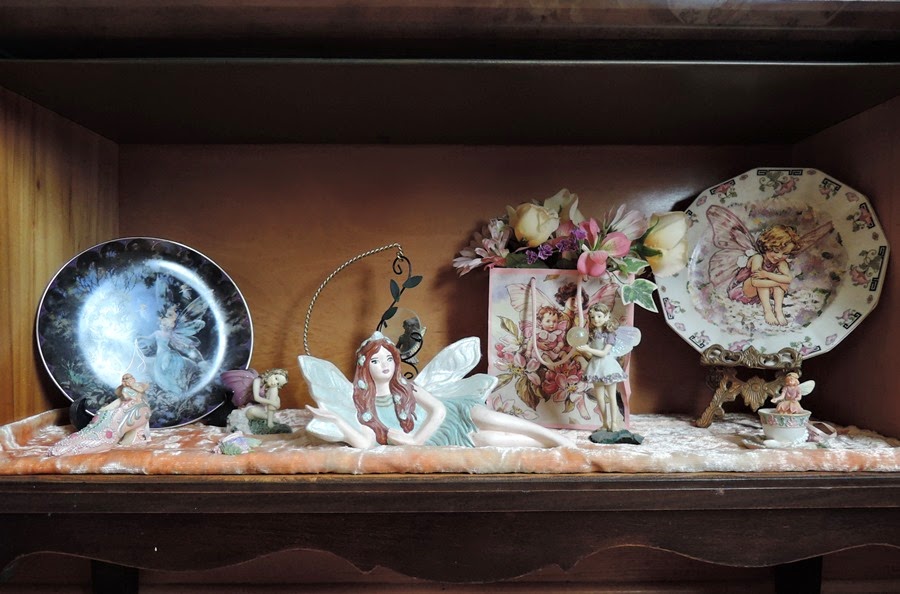 This week I was invited to go to a house clean-out. The property was a 1930s twin house, the woman's grandparents (married in 1913) had lived on one side, her parents (married in the 1940s) lived in the other. The grandparents died in the 1970s and her parents just basically closed off that side of the house, left the grandparent's items in there and just used that side for storage and part of it as an art studio.
The woman's mother passed several years ago and the father just passed last year, so now she is having both sides cleaned out to sell the house.
We went through the grandparent's side which was mostly 1940-50s items, furniture, clothing, linens etc. Nothing really older than 1930s, which was probably when they moved in, and not much after 1960s. I got a nice load of clothing, dresses and lingerie, some linens and wedding photos from the 1940s. A lot of what I left behind was just all faded and moth eaten from having been neglected for so long.
We just glanced through the parent's side of the house, the woman is still removing things that she wants. The decor is still 1950-60s, but the clothing looks 1980-90s, so I don't think I'll get much clothes-wise from there.

From the grandparent's side, I found this cute little suitcase. It turns out that it is an old at-home perm kit, probably from the 1940s. Actually 2 sets of clips, spacers, rollers etc. squeezed into one case.
I just though that it was pretty cool. 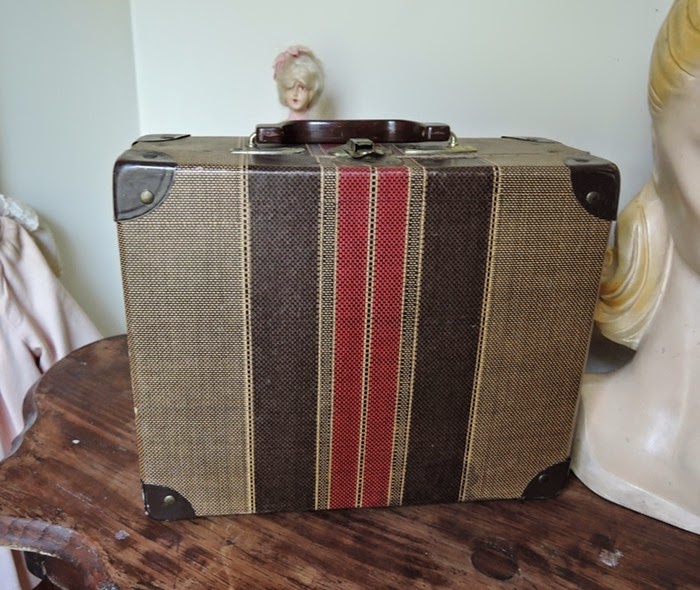 There are even 3 partial bottles of old perm lotions in there. 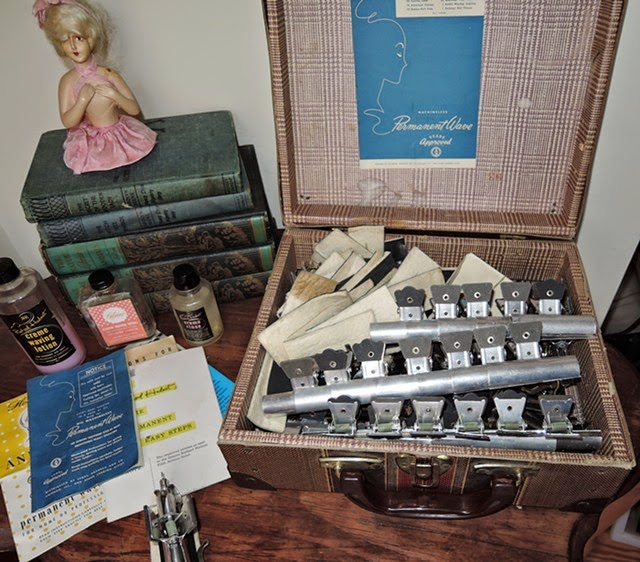 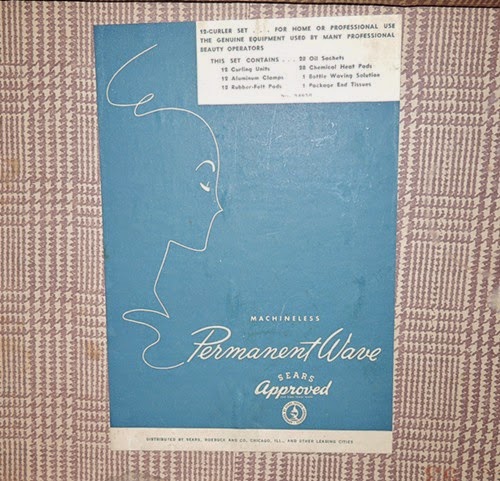 Some of the lotions and booklets. 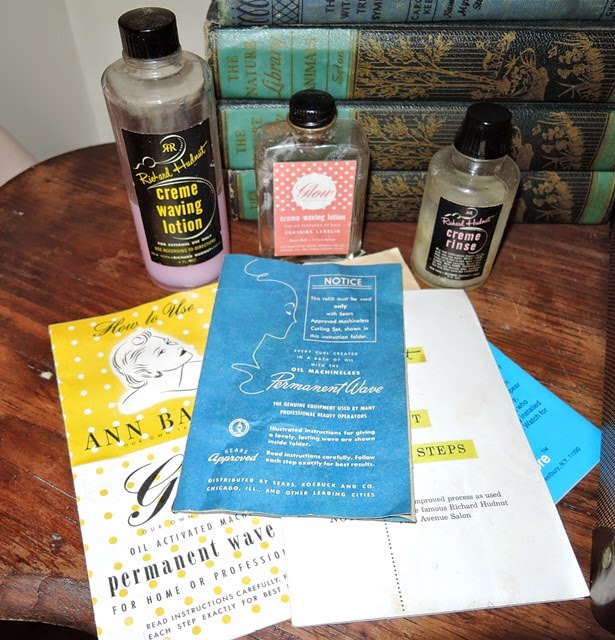 It took all of the items below to do one curl/wave.
The 1st piece is felt and rubber with a slit in the middle that you pull the section of hair through down to your roots.
Next is a metal and rubber spacer that you clip onto the hair at the roots.
Then you roll the hair in the paper onto the metal curler.
Then you clip the whole thing.
All of this would have been so heavy on each curl.

Each wave/curl on your head would look like this - 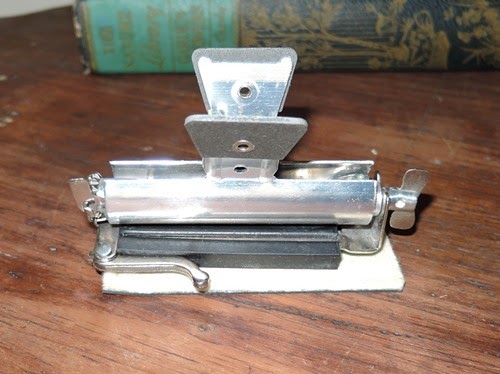 The Sears Booklet and the Ann Barton Booklet that came with each set of clips. 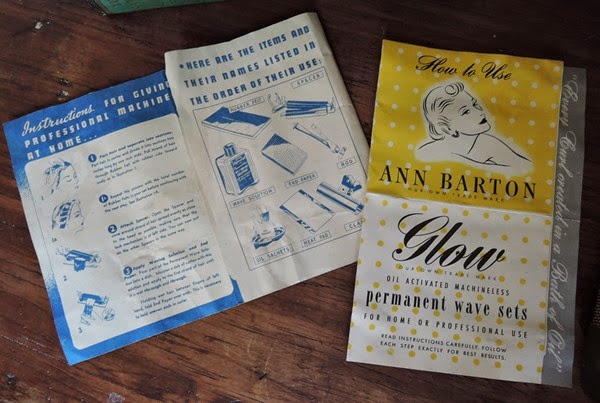 Hey! I'm Carol. Here you'll read about stuff that I like, stuff I do, stuff I make, my bulldogs, the Old Fashioned (real) Jersey Shore and the vintage stuff that I collect and sell.
I own the Dandelion Vintage Clothing website, online since 1997. Email Carol